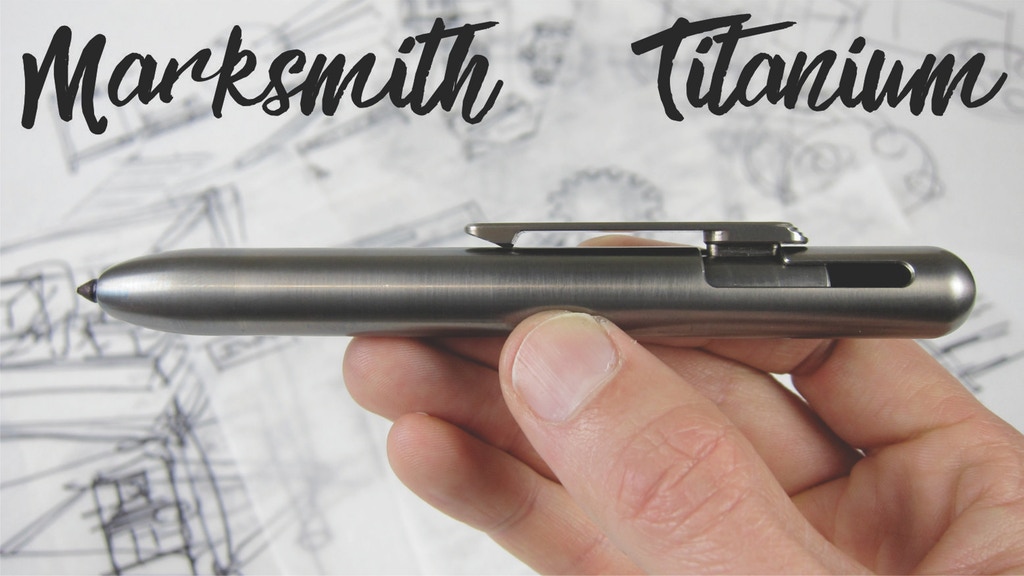 MARKSMITH Titanium | The Best EDC Marker You'll Ever Own

Carry the world's first titanium retractable permanent marker every day to make a bold statement on surfaces that a pen can't write on.

Latest Updates from Our Project:

I've been informed that the production of the Marksmith packaging box (see the previous update) is about 2 weeks out from being completed. I've asked the machine shop to go ahead and ship 100 pcs without the final packaging, which they will be able to ship at the beginning of this week. This will give us a head start to inspect and perform the final assembly of the Marksmith. That sample size from the production run will also be enough to inspect the quality to approve the next production run. This will save time over waiting for the whole 1st production run to be completed.

In the previous update, I showed the bodies and tips after machining. Later I received pictures of the clips and bolts. All these pics are from post-machining, but before the final surface finish.

Here are the clips:

Here are the bolt slides:

I've been told that the first production batch is finished. The packaging (gift box) has been approved and we're waiting for those to arrive.

You may be thinking... Who cares about the packaging for Kickstarter? I just want to use my Marksmith ASAP!

In addition to the presentation, the packaging is an important part of safely shipping the Marksmith. If Marksmith was shipped from the machine shop to us without packaging, it would still need to be carefully individually wrapped, padded, and boxed. I receive raw parts all the time for other products we make, and it is a constant struggle to get the factories to properly package the parts so that they don't arrive damaged. In some cases, I even have custom shipping crates that I ship back to the factory empty to have them refill. Once at our workshop, Marksmith also needs to be well packaged with the extra refill cartridge to be shipped to you. The best way to achieve all of this is with a custom box.


The packaging had to be changed from the metal tin box to a heavy-duty cardstock box. I had told them early on that the box needed to fit a Marksmith and a refill. The initial metal boxes were a bit small, but I thought they had planned to get a larger size to fit the refill too. This is what the original metal boxes looked like:

I liked how the metal boxes looked, complementing the Marksmith design.

When they showed me their solution for fitting a spare refill, which was to place the cartridge against the Marksmith, I said that was not acceptable, and there needed to be some padding between the two. Also, the clip was now facing the lid and would need a layer of padding to prevent rubbing on the lid. The tin box ended up being too small for both the Marksmith and refills.

Unfortunately, there were no other "off the shelf" sizes of the tin box that would work. The minimum order qty for a custom size tin box is 10,000 pcs, so I could not do a custom run either. That meant the only quick solution to nice packaging is a cardstock box similar to the one I showed in a past video. This is a preview of the box design showing the front flap.

Special thanks to MARKSMITH backer, EDC enthusiast, and awesome designer, Arvid Al Chalabi (see his Youtube here) who helped with the logo and design layout. It was awesome to get a passionate Marksmith backer on board to help out with that. I'll reveal more about the work we did in a future update.


So as of right now, we're waiting for the packaging to be completed, then the machine shop will put the finished MARKSMITHs into the boxes and ship them to us. At our workshop, we'll put the permanent marker cartridge into the Marksmith and the extra refill in the box, test functionality, inspect the quality, and ship them out to you.

The machine shop has finished machining the MARKSMITH parts for the first production batch, and they have sent some pictures. This is the raw machined parts, and the next step is to apply the surface finish. Only the bodies are shown in the following images since the surface finish has to be applied before the final assembly.

I'm very excited to see this progress and look forward to receiving them. It's taken longer than anticipated, but you're going to appreciate the detail and perfection that has gone into your Marksmith.

I received a lot of questions as to whether the MARKSMITH FINE would be compatible with highlighter cartridges. Watch the video below to see the results.

I'll be doing a GIVEAWAY for a MARKSMITH production sample with a set of 5 highlighter cartridges (to be shipped with your Marksmith). All you have to do is LEAVE A COMMENT ON YOUTUBE VIDEO (About whether you would like to see the highlighters available as an add on (or don't care), and if you prefer a specific color, or want the set of 5 different colors) and BE A YouTube SUBSCRIBER (Link To SUBSCRIBE to my YouTube Channel if you haven't already). One comment will be chosen as the winner.

I'll be reading your comments because I want to know the level of interest in the highlighter option to get an idea of how many highlighter cartridges I should prepare.

Production is moving along. The machine shop says that they are 2-3 weeks from shipping.

The overwhelming feedback from everyone has been "no logo", so that's what I'm planning to do. I've heard from many backers that the minimalist and clean appearance is what made them pledge for the Marksmith, so I won't be changing that. Therefore, there will be no logo on the marker body for all Kickstarter backed Marksmiths. Watch this video where I discuss some of my thoughts on a logo for post-Kickstarter Marksmiths, and also the packaging design. I'd like to hear your feedback on those ideas.

I do want to investigate logo designs and locations for the future (post Kickstarter). There have been some interesting location suggestions:

1. On top of the rounded end

2. The underside of the clip

3. On the slide that the clip is attached to (it is hidden until you extend and rotate the bolt)

4. Next to the threads on the tip, such that you have to unscrew the tip to reveal the logo and a serial #


I plan to add a design to the metal box, and ultimately a cardstock sleeve that slides over the box (this is likely going to be for post Kickstarter units). Are you a graphic designer that could help with the logo design, or a packaging designer who could work on the layout of the cardstock sleeve design? I would love to have the Kickstarter community contribute to these design elements.


MARKSMITH is the name of the titanium marker. SOUL BUILT is the brand that I have recently created that will encompass the EDC gear and KRVR kitchen knives that we make. (If you haven't seen my knives: https://www.krvrknives.com/ and https://www.youtube.com/playlist?list=PLJZvr9eL7PeysXTOE5Yvtz5n5N_Cl1dri )

For me, there's a lot of meaning behind the brand Soul Built. It truly describes what we do to take these designs from ideas to real products in your hands. I will delve deeper into the meaning later.

It took longer than expected to review details and discuss production with the machine shop after the second sample set. The production downpayment (which covers the first half of the Kickstarter orders) has been paid, enough material and tooling for 5,000 Marksmiths was ordered. The first batch of 500 Marksmiths is currently about 30 days out. I was told that the next batches will take less time than the first because the material and tooling will be ready to go.

Bastion will be announcing their new Ti pen on an update to their prior Kickstarter campaigns that I managed.  Their pen should not be confused with the MARKSMITH line of titanium writing instruments produced by me. I was involved with the original Bastion Carbon Fiber Pen Kickstarter, but their new ti pen was developed independently of me. I just wanted to clear up the distinction in case there is any confusion since I've also been saying that I plan to make a titanium pen. That being said, their new ti pen is the same design as the previous stainless/cf pen which is a great pen that many people love, and therefore I would not hesitate to buy one. It has an independent bolt and clip design. In contrast, my pen design follows the Marksmith aesthetic with an integral clip and bolt, where the clip is used to extend and retract the pen.